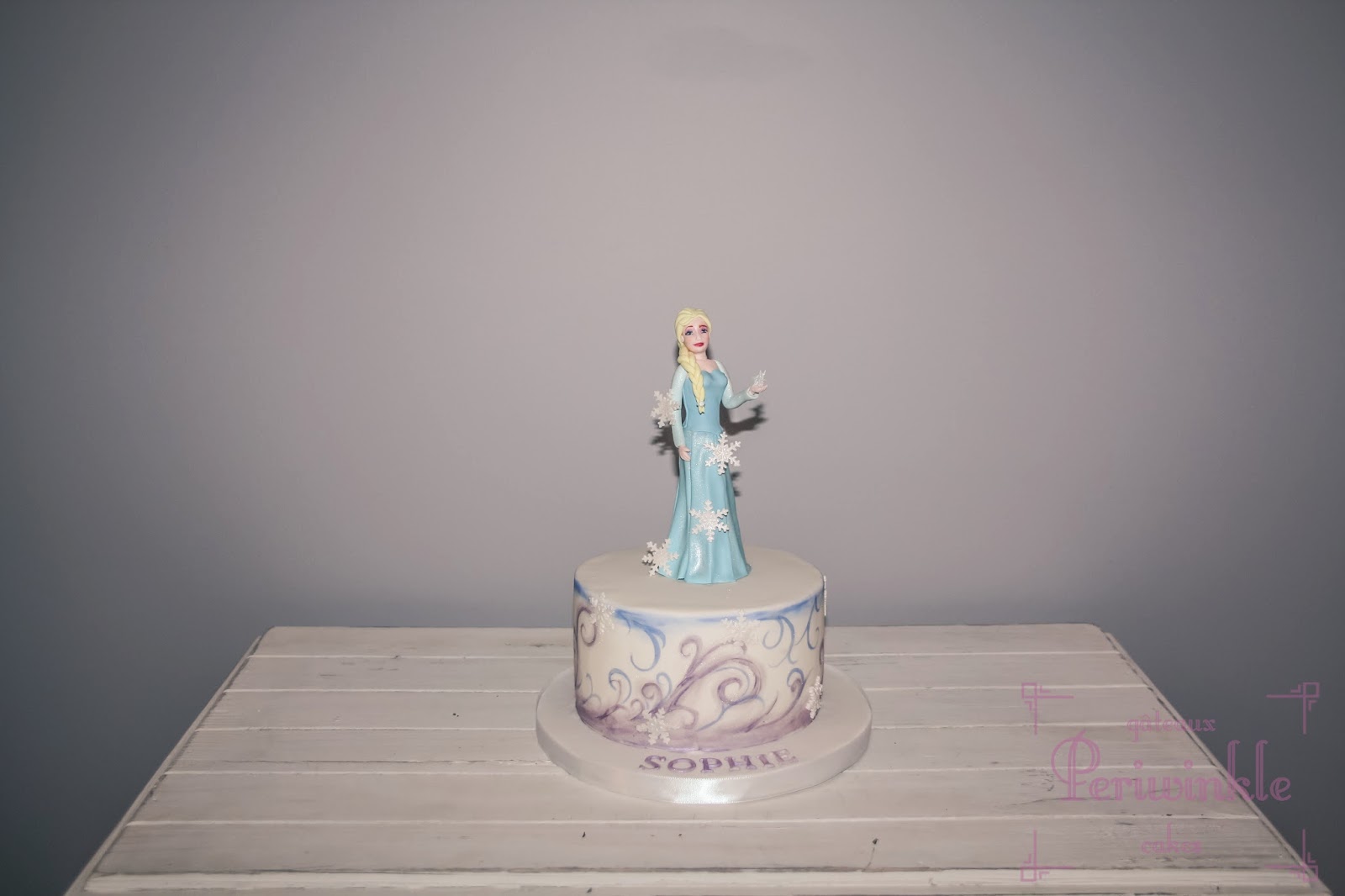 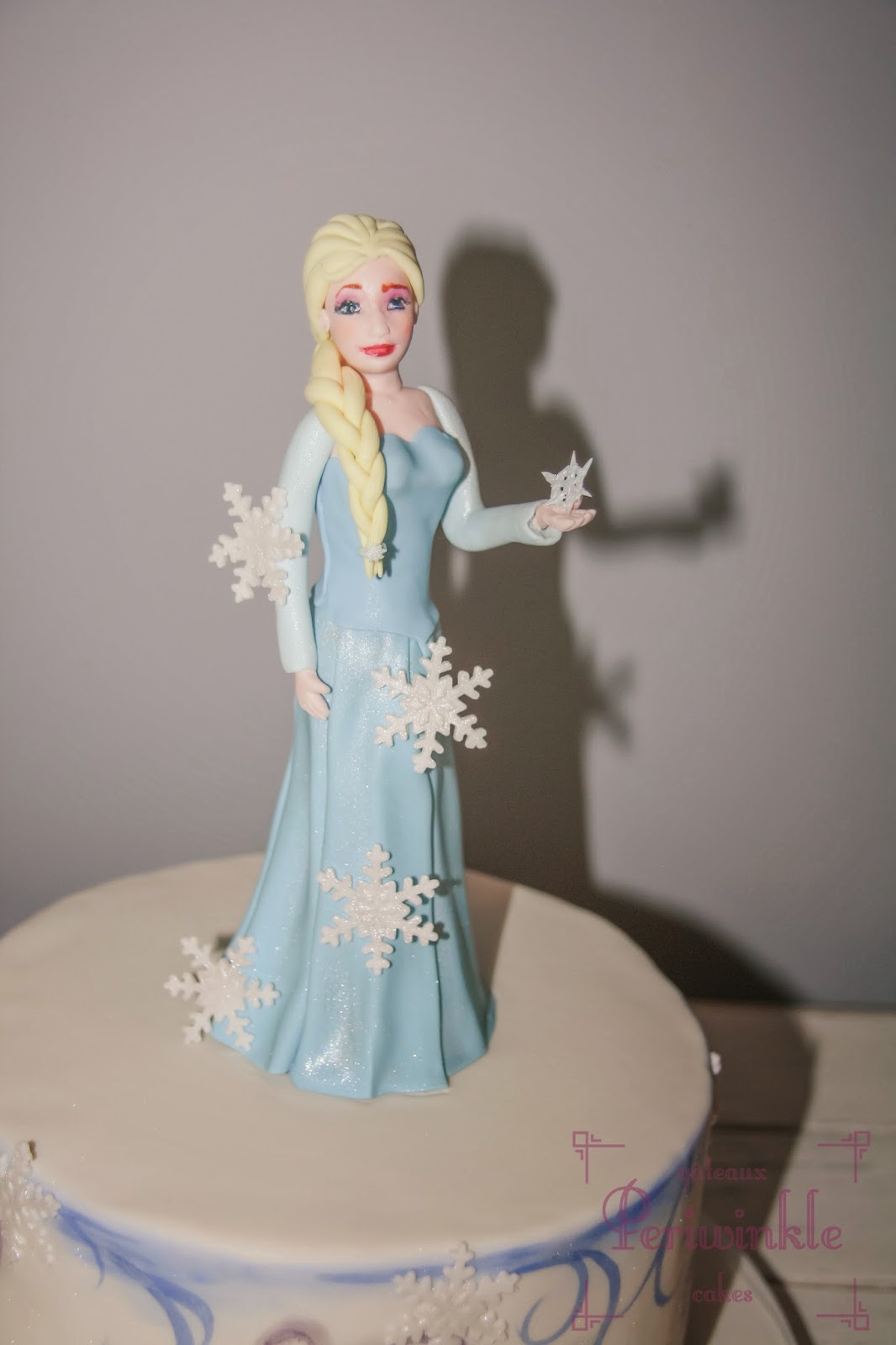 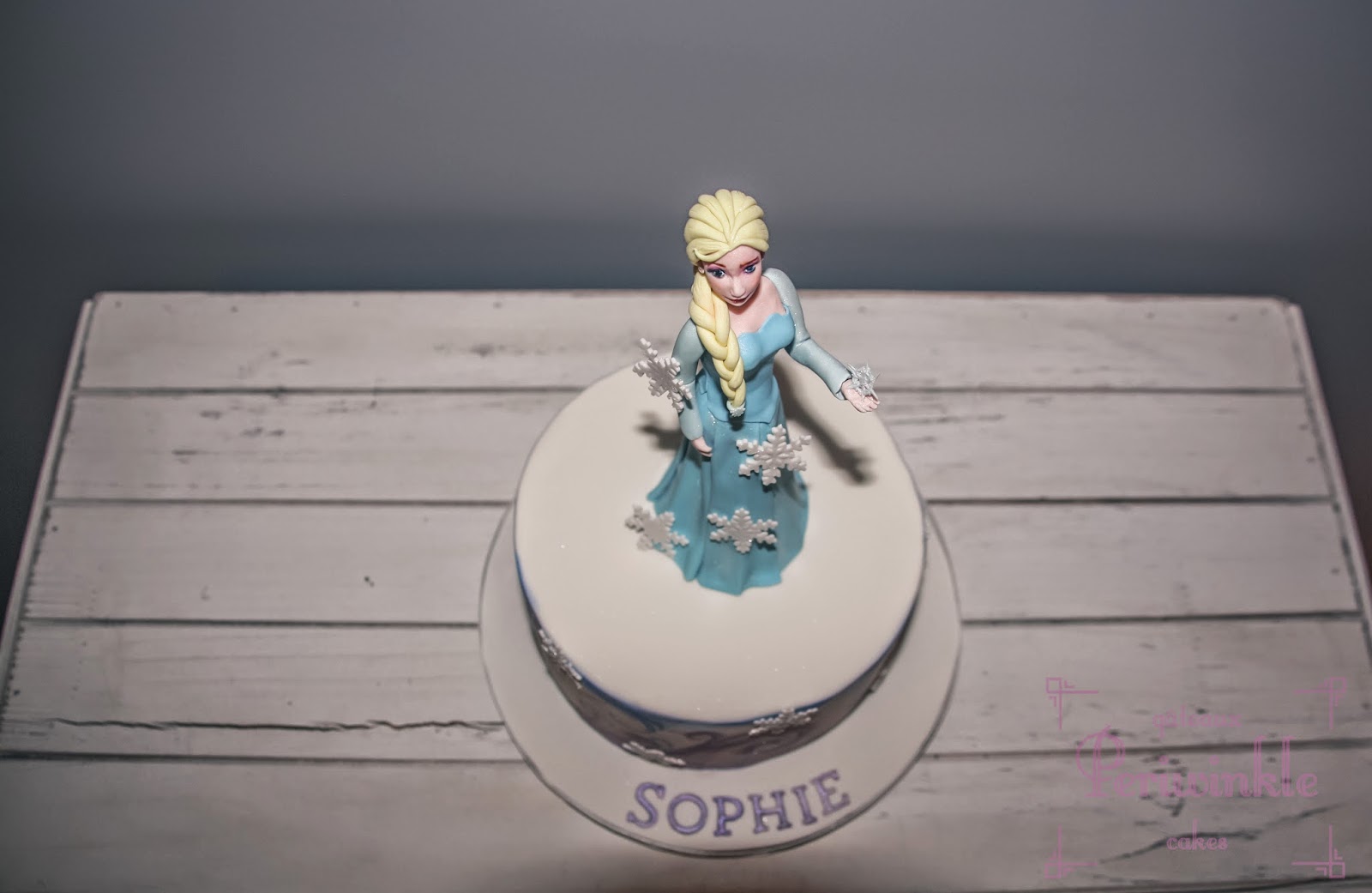 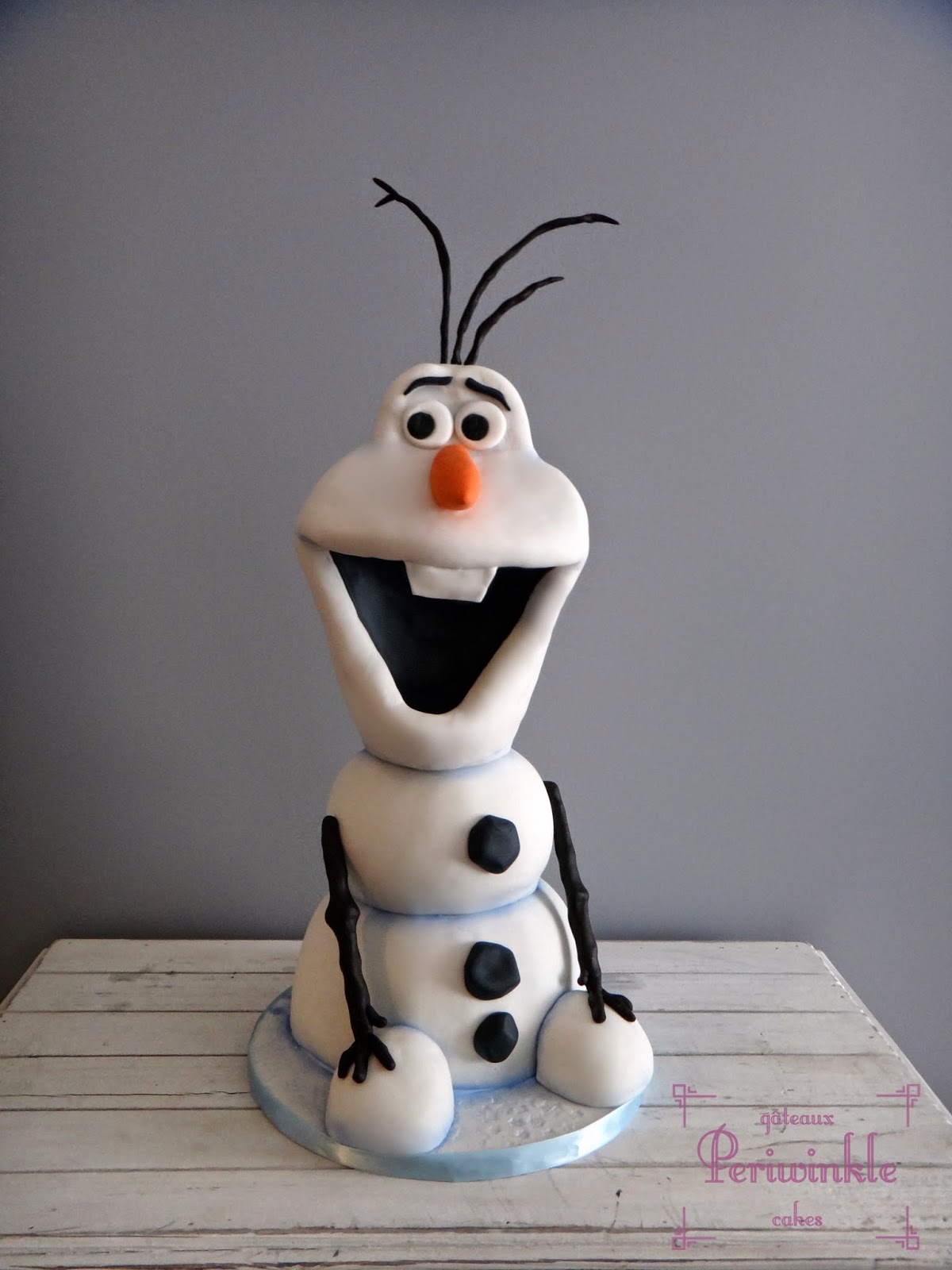 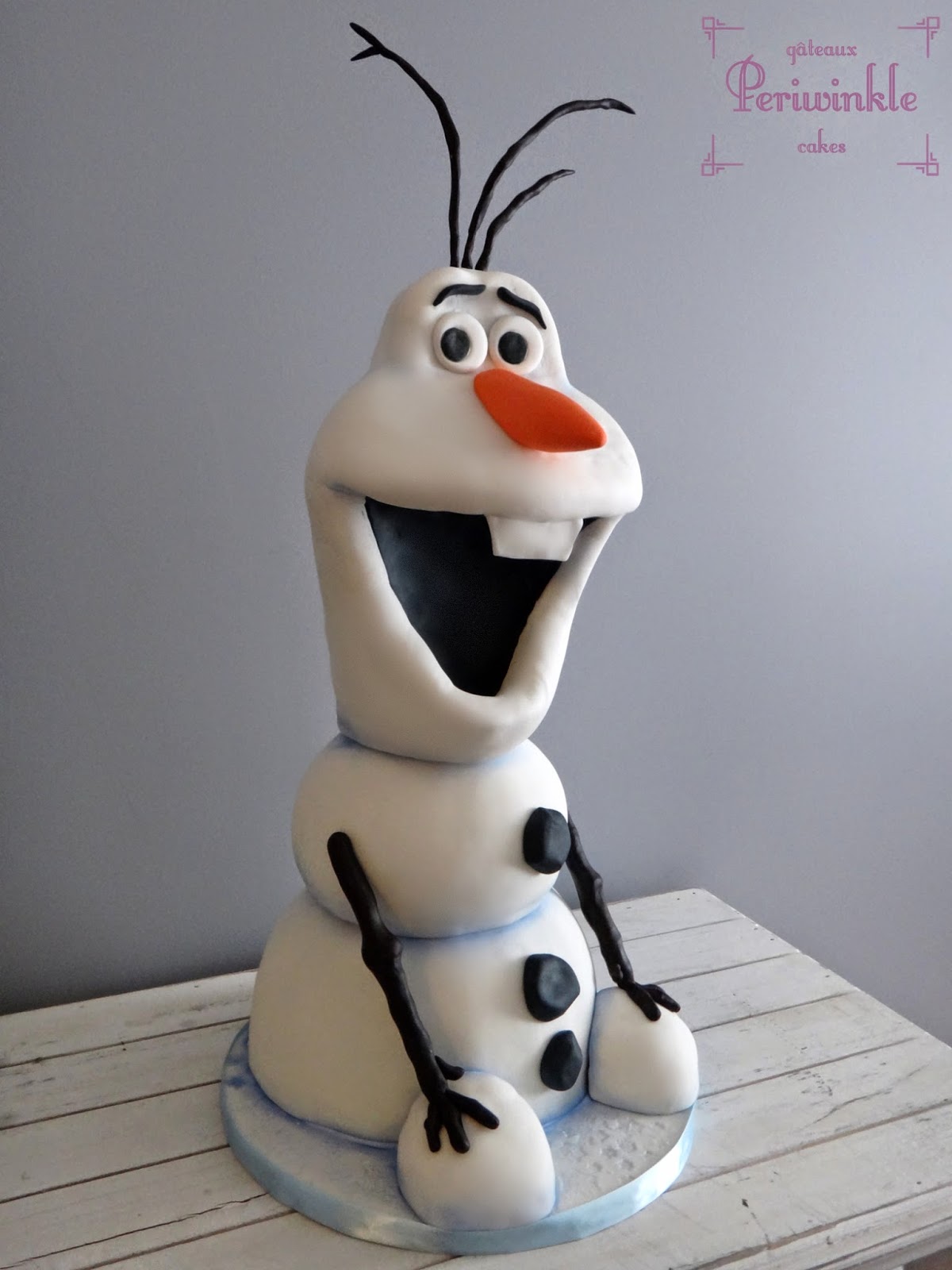 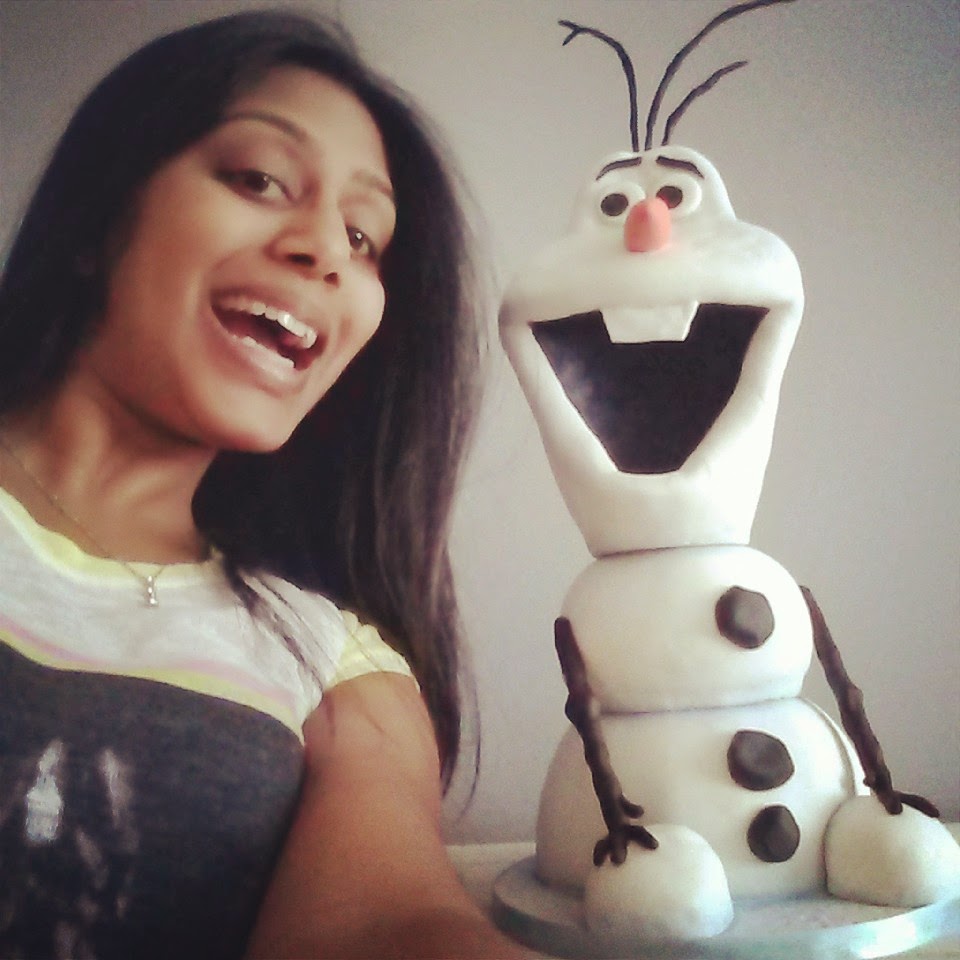 Once upon a time, there were three lovely lady friends who all got pregnant around the same time. Nine beautiful months later, the three friends gave birth to a wonderful trio of February babies, who are destined to be the bestest of friends! And for their first birthday, I got to make them a cake topped with three figurines, one for each of their favourite things. One was Paddington bear, the other a somewhat bizarre rectangular own, and the third, a doll the little girl likes. At first I thought it might be a bit random, but they looked wonderful together! (Don't judge me on my terrible photography skills, I know these were terrible!) 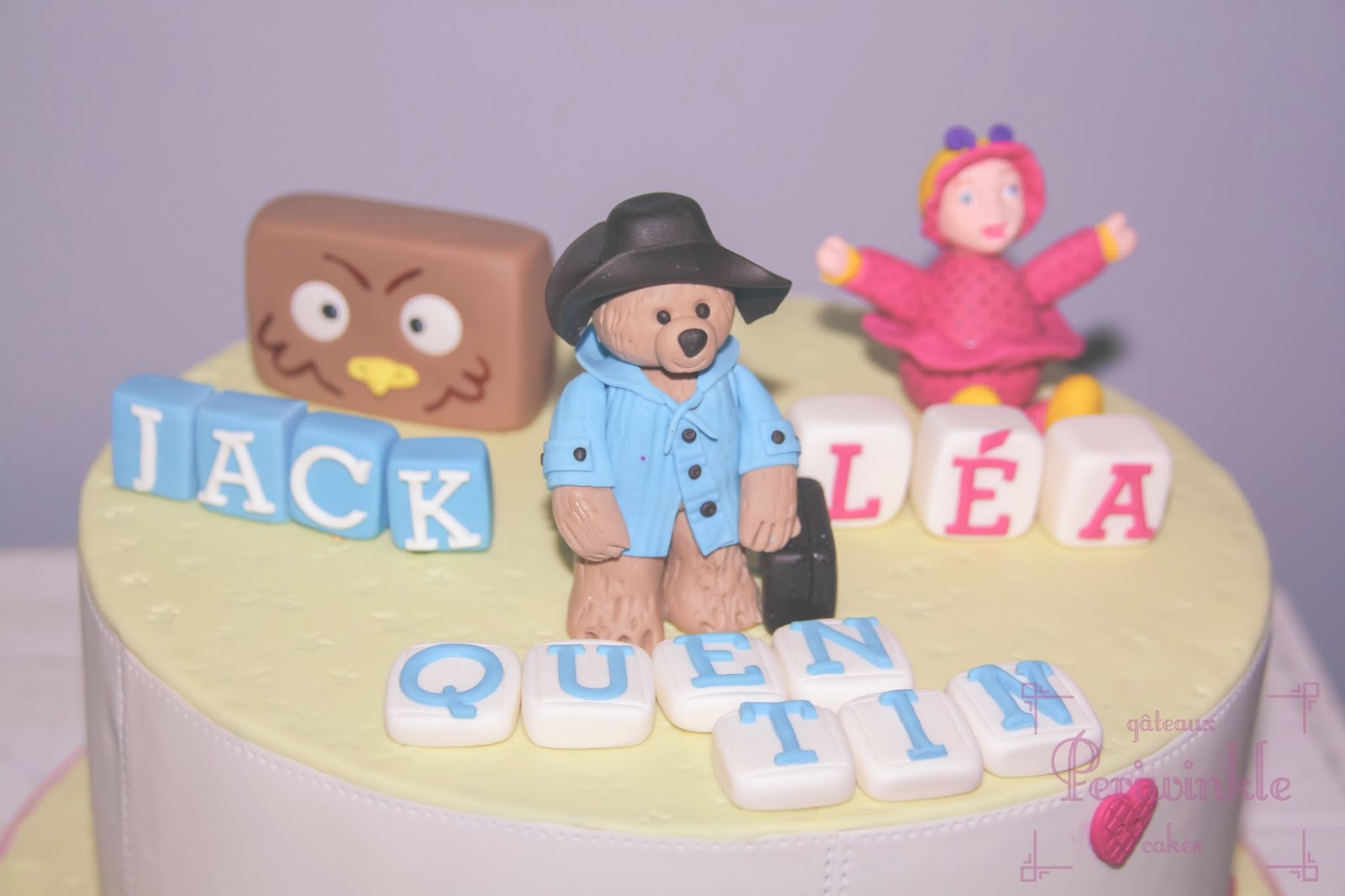 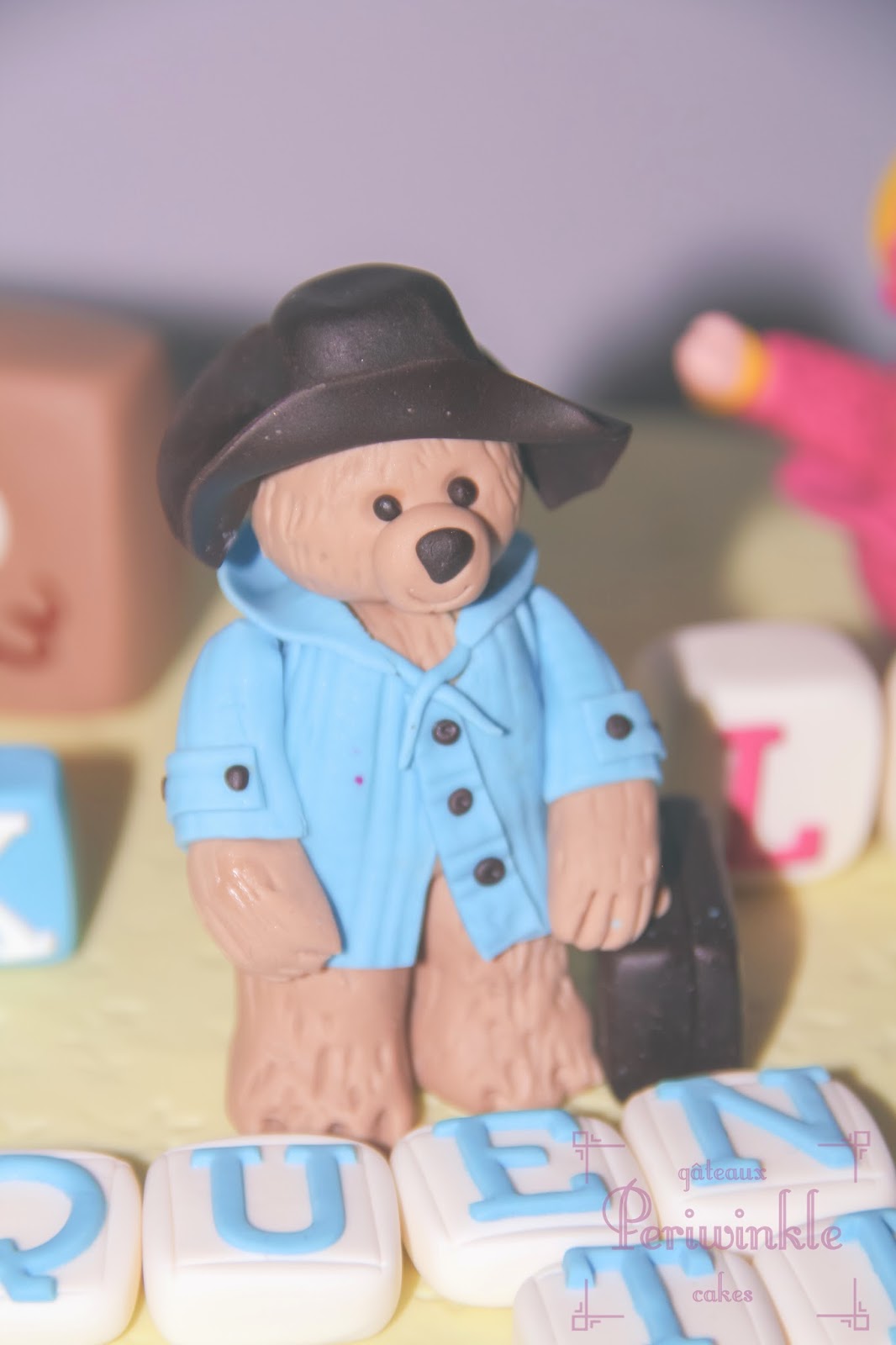 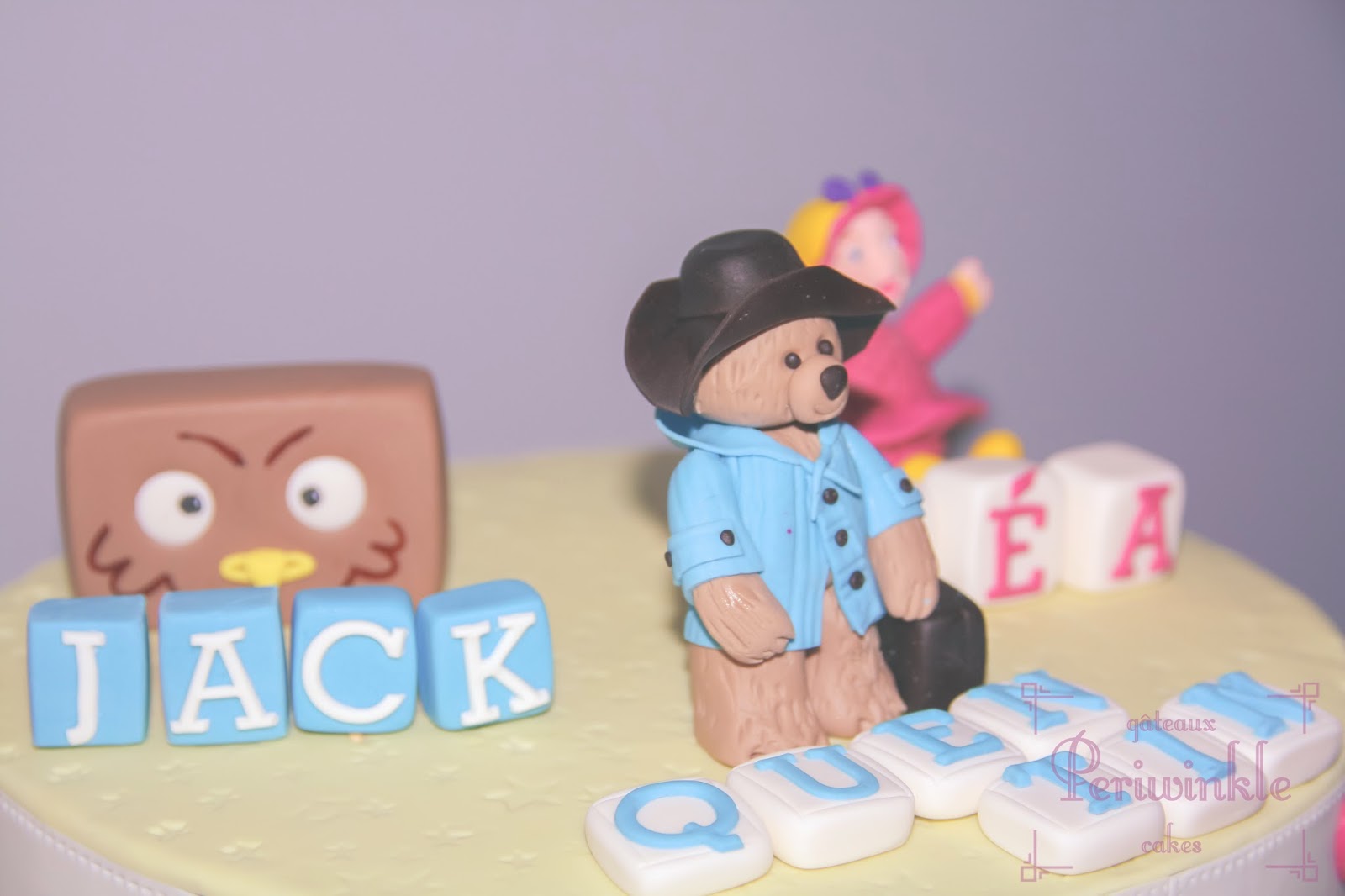 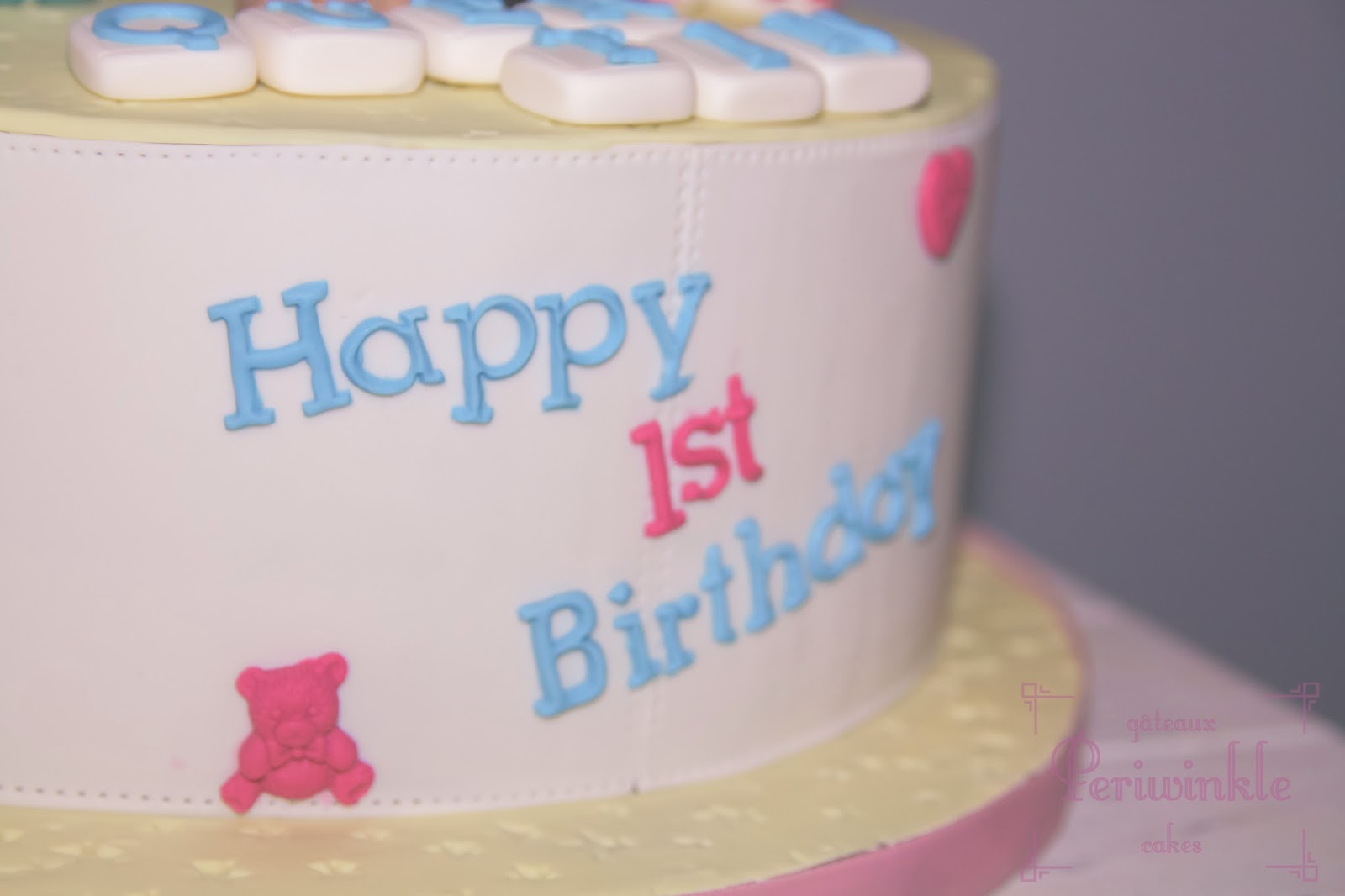 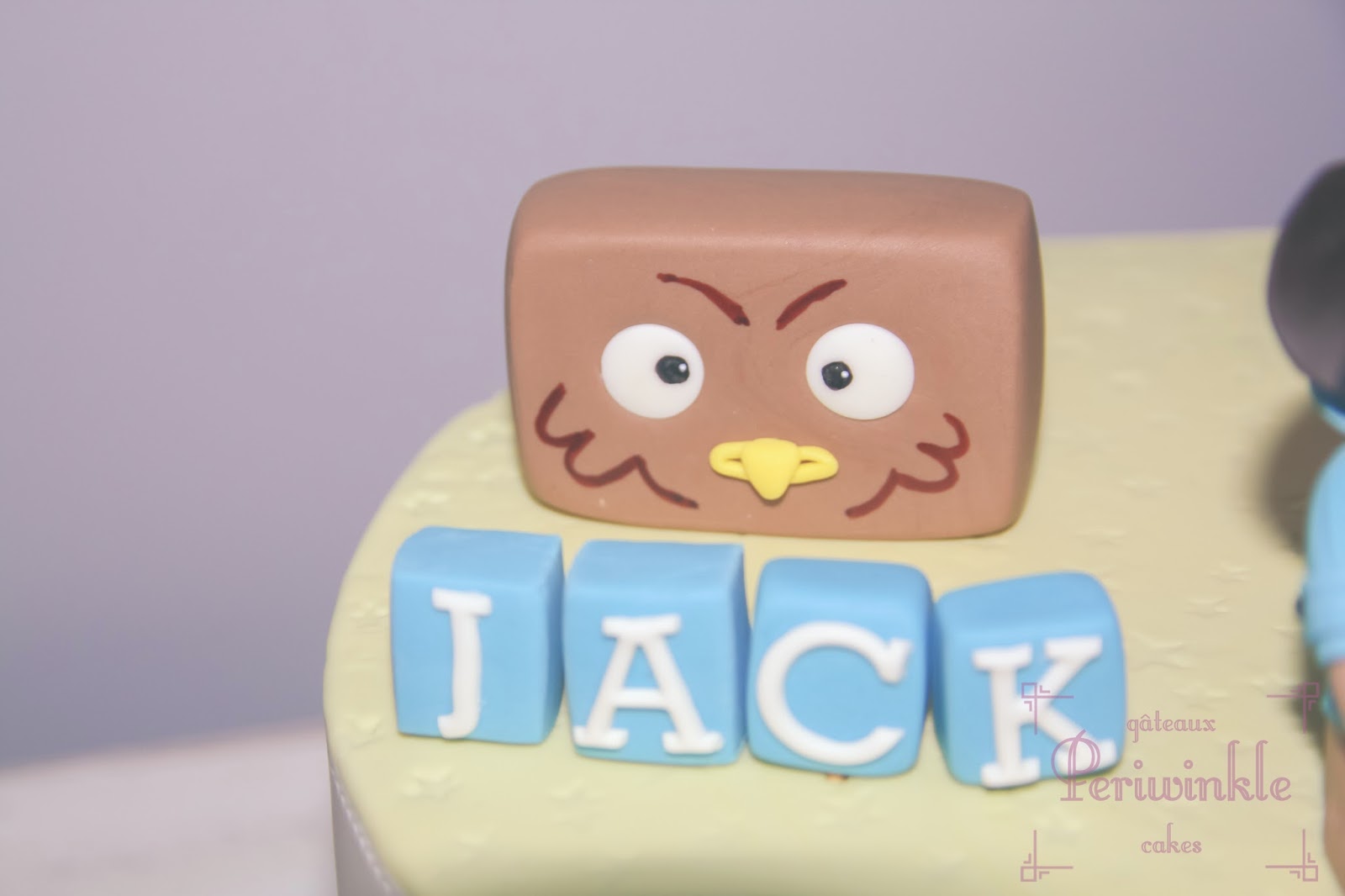 The real pleasure though was seeing the kids digging into the cake and looking beyond happy in their first introduction to chocolate overload! 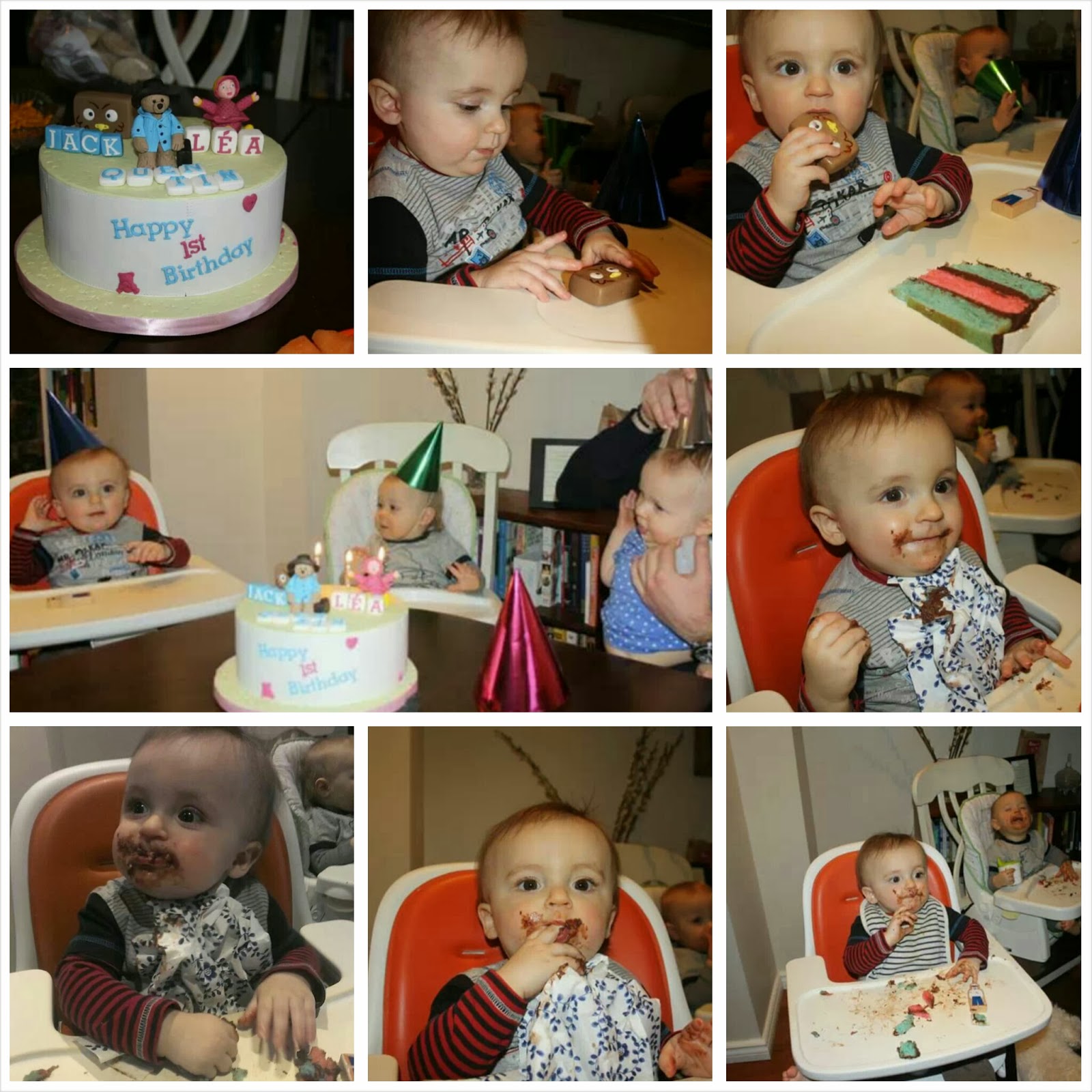 Posted by Maathu at 7:22 AM No comments:

As popular as Hello Kitty is, this is surprisingly my first ever project themed around this cutesy little cat. Birthday girl's party momma contacted me asking to make an ombre cake and matching Kitty cookies. I was so very excited, seeing as the very talented ladies planning this party always design the most beautiful sweet tables.

I made this little girl's baby shower cake, as well as her 1st birthday cake, and now, the big two! It's quite possibly my favourite part of what I do! I get to be a part of all the big moments in this little lady's life, from even before she was actually born! 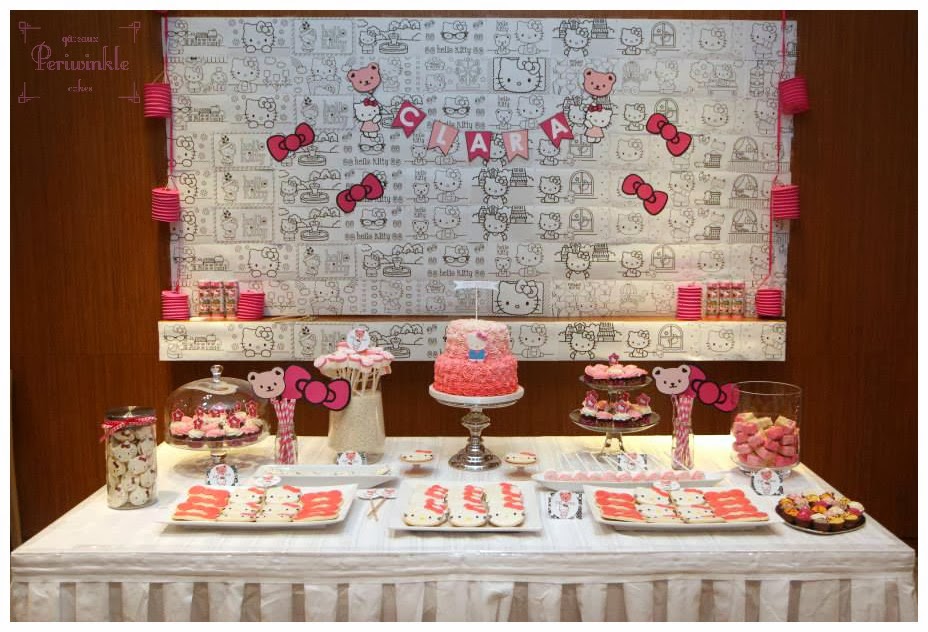 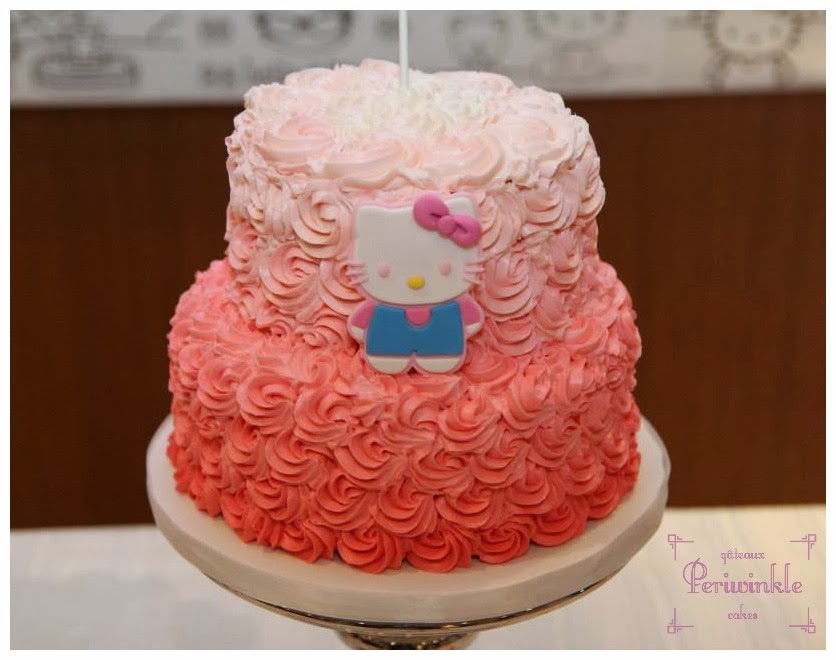 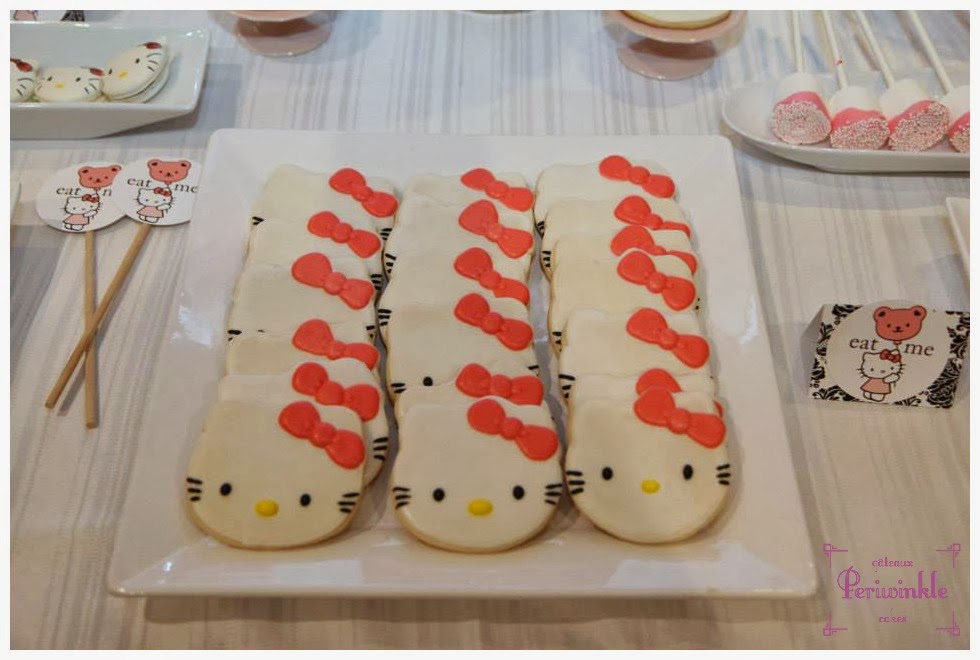 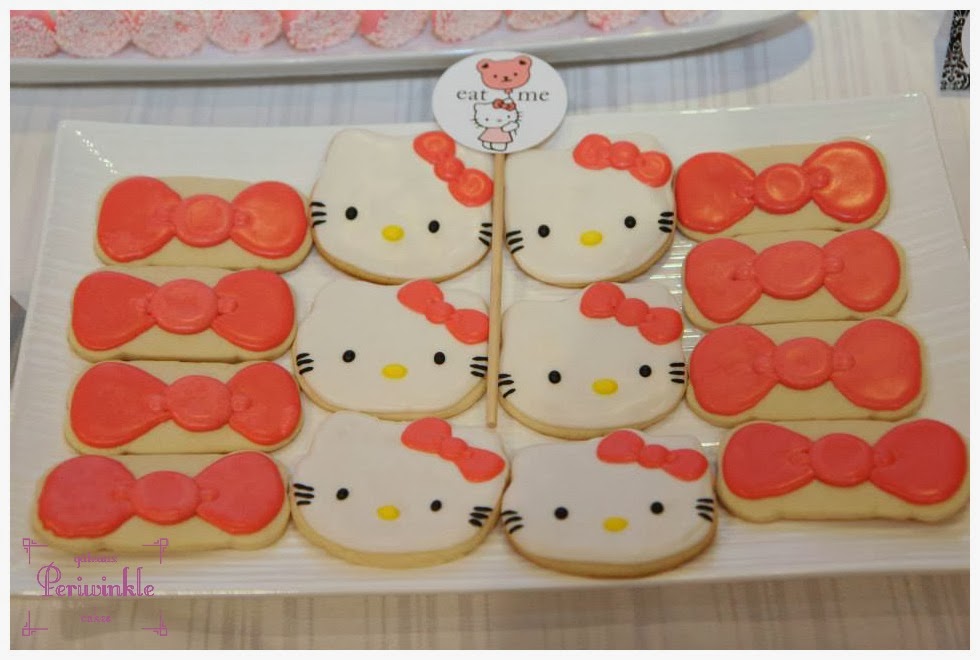 Posted by Maathu at 6:03 AM No comments:

I'm sorry! I have probably been the worst blogger to ever exist. It's been forever since my last post, and it's not for lack of cakes to write about! I have been caking non stop, and it's been wonderful! A whole lot of big things are happening this year, it's all so very exciting! I took part in my very first bridal show in January (pictures to come), my new website is up (www.winkle.ca) and a whole lot more exciting stuff to follow! But first, here are a few pictures from my last two weddings of 2013.

The first is from a wedding that was held at the beautiful Windsor. Such an elegant location required an equally elegant cake! The bride wanted to surprise her hubby to be with a soccer ball somehow incorporated into the cake. The bottom tier was also inspired by her wedding dress. I'm loving the ruffle rose, and the trend hasn't died down just yet! I still have two more for 2014 weddings with ruffle roses! So pretty!

So, I had to beautify a soccer ball, include inspirations from the bride's dress, and make the sure the whole thing wasn't a hot mess, and would fit into the elegant setting of Le Windsor. Challenge accepted!

My last wedding of 2013 was a December wedding held at Auberge St-Gabriel. I was asked to create a vintage lace inspired sweet table, filled with cookies, macarons, cupcakes, and at the centre of it all, another ivory and gold cake. We brought in a ton of props, from candle sticks, jewelry boxes, and even little perfume bottles to tie it all together!

I love that my caking business grows along with my clients. This little one's first birthday cake was one of my first big cakes ever, and I've been making all her cakes for the past four years! How time flies!

This year, they did something extra special, and had a wonderful animator from Educazoo bring a whole lot of critters to the party. There was a rabbit, a few little rodents, some ooey gooey reptiles, and a snake! All the children, and even a few of the big kids, got to interact with the animals. The star of the show was a ferret who did tricks, and even danced a little :) He was also the star of my cake! The ferret was made out of rice crispy treats, and the rest of the critters were made of sugar. Apparently kids love devouring sugar critters! ;) 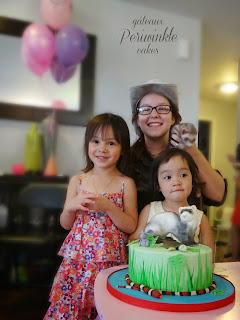 Here's birthday girl and her sister, along with the animator, trying to capture a shot of cake ferret with the real ferret... Ferrets don't really stand still for pictures :p 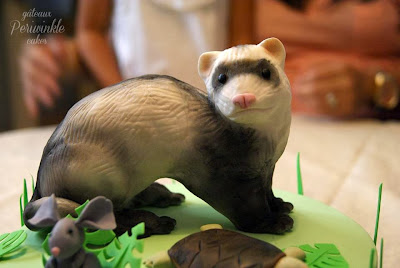 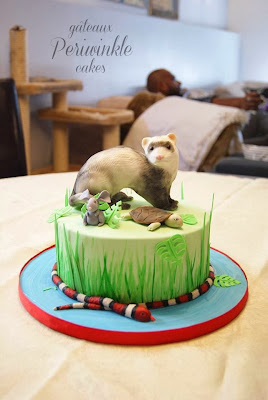 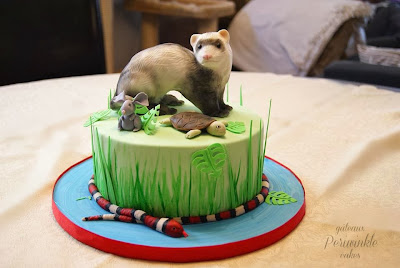 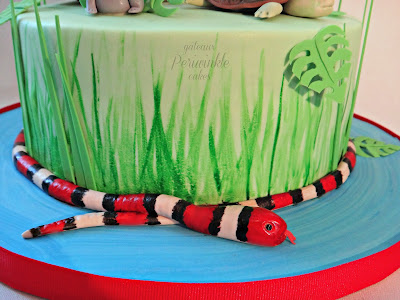 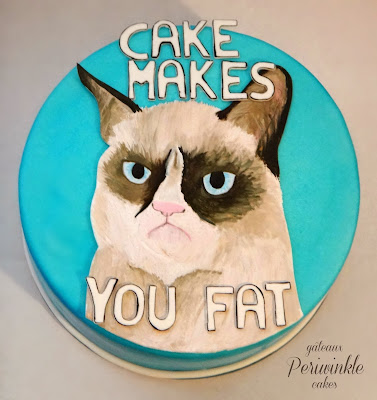 Well then, no cake for you, Grumpy Cat!

This cake makes me chuckle every time. This poor misunderstood kitty is really just a big fuzzy ball of cuteness! Hands down, my favourite meme, and one of the most fun cakes to make. I love painting, and this little guy is entirely hand painted using food colouring on a fondant canvas.

The lovely birthday girl was such a doll, and let me share these amazing pictures. Her reaction is priceless! 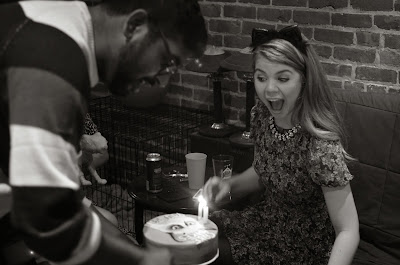 My cake also got attacked by the phone paparazzi! 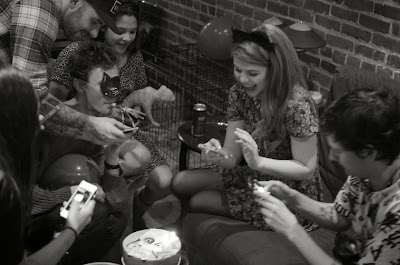 Posted by Maathu at 6:50 PM No comments:

A Song of Icing and Fire

If you're not entirely obsessed with the HBO series Game of Thrones, what ginormous boulder have you been living under!? It's only the most awesome show ever!! (Also apparently the most pirated show ever, which really is something!) Really though, the show has it all - fantasy, romance, battles, backstabbing, so much tragedy, and most importantly, amazing sets and costumes! I've said it a million times, I think I was born in the wrong era. To which, my dear fiancé replies that I need to remember that if I were born in the middle ages, by now, I'd have been married off, have a few children, have very few teeth left, and be very close to my death bed. Way to ruin my fantasies, but whatever. Point is, I literally squealed when I got a message asking me to make Game of Thrones cupcakes.

Brace yourself, the cupcakes are coming. 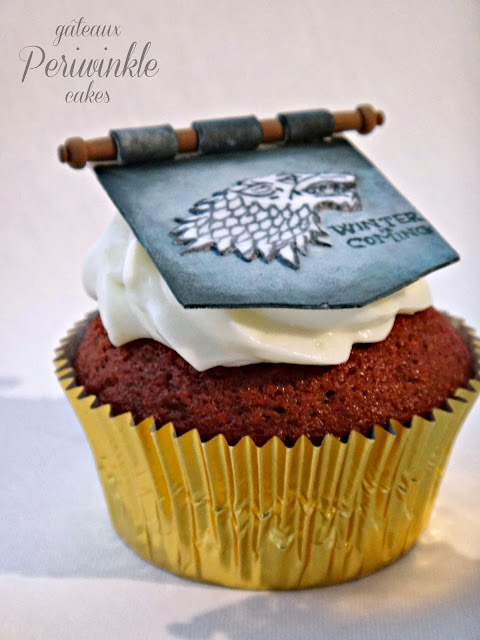 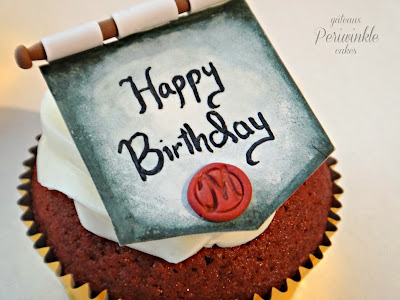 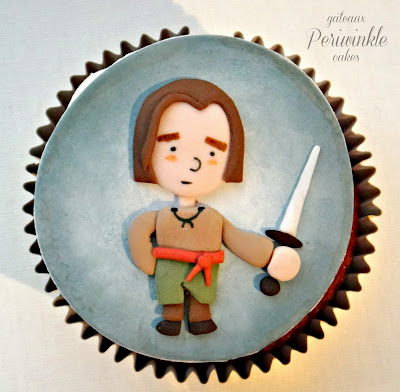 The batch of Lannisters was my favourite. Isn't Tyrion just precious!? 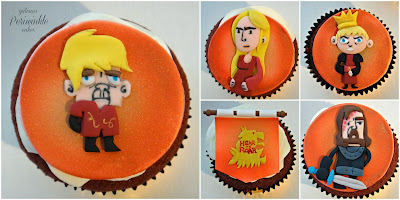 And finally, the mother of dragons with her Dothraki hottie, Khal Drogo <3 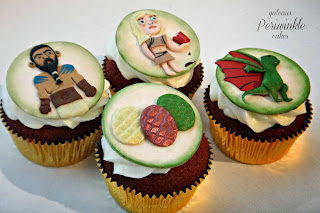 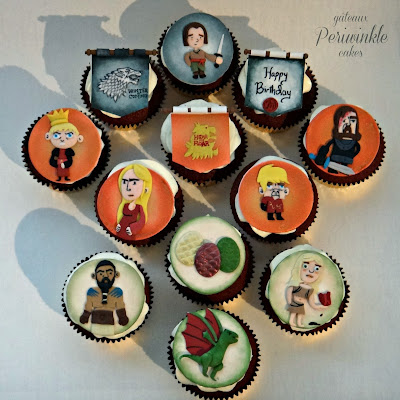 Posted by Maathu at 2:06 PM No comments: